I haven’t picked up a microphone in a month and a half.

For the past ten years, I spent my days keeping my community informed. House fires, groundbreakings, murder arrests. A hungry journalist with a story to tell — every day. It is an amazing, exhilarating feeling to live a dream. I was honored to give a voice to people in my city, to share their pain; their pride.

But the life of a television news reporter is not an easy one.

TV journalists can’t be picky about the location of their reporting, especially in the first five to 10 years. In college, my journalism professors warned my class that if you get a reporter job offer, take it, no matter the city. Because it will likely be your only shot. The way the industry works, the newbies have to start at the bottom. There are 210 television “markets” in the United States. As you’d guess, New York City is number one. Glendive, Montana [where?] is market 210. A few months removed from college at Ohio University, I got my first offer. Market 208 [at the time] — Alpena, Michigan.

I’d never heard of Alpena before I mailed a news director there my resume reel. I’d mailed hundreds in the months after college as I hunted for my first gig in TV. You literally would put your “reporting” work onto a VHS tape to show news directors what you’re made of. You’d mail that off with your actual paper resume…and cross your fingers your tape stood out in the thousands each news director sifts through on a daily basis. I caught the eye of a news director in Alpena so one summer day, my mom and I loaded into the car and set off on the long trek to the tippy top of the “mitten” that is Michigan. Alpena is practically as far north as you can go. Coming from Cleveland, Ohio, the cold and snowy weather was a manageable reality for me. But as the car continued cruising up, I started worrying this city would be too cold for a Cleveland girl.

As I stepped into the newsroom, I understood why this city was one of the smallest news markets.  The space was tiny, with about ten desks crammed in.  A few members of the staff were seated at their desks.  And the first thing I noticed is that they were all chatting and playing on social media.  I think it was actually instant messenger they were using [and now I feel old…].  And I was instantly turned off.  While this looked like a laid back environment, I was ready for a challenge.  After returning home following the interview, I thought long and hard about my decision.  The words of my professor echoed in my mind, ‘turn this down and you won’t get another chance.’  My gut told me that was a gamble I’d have to take.

Months passed before I got another call.  But finally, when I’d just about lost hope I’d ever get to take the first step toward my dream job, Larry Stine called me.  He was [and still is] the news director for WMFD-TV in Mansfield, Ohio.  A quick one hour and 45 minute drive from home.  I was offered the position of weather forecaster and reporter.  I took it.

While the city was close to home, there wasn’t a lot going on.  No booming metropolis.  No pool of young professionals.  Really, not even a pond of them.  I spent my weekends driving back home to Cleveland to be with family and friends.  It was doable, but not ideal.  Two years later, I accepted my second TV job at WOWK-TV in Charleston, West Virginia.  [See what I mean about not being able to be picky about location?]

I learned a lot about myself in the four years I spent in the rolling mountains of West Virginia.  I leaned how to be independent.  How to be a real journalist.  But I was a big fish in a very small pond.  While there were more young professionals here than my last stop, this group was territorial.  In my experience, I learned those from the Mountain State didn’t welcome outsiders with open arms.  Competition.  In work and in life and in everything else.  And no one wanted that.  I didn’t make many friends living there.  My best friend was also a reporter, working at a competing station.  She and I were isolated together.  And it was nice to have someone who “got it.”  To this day, Meredith and I remain best friends.  I left West Virginia with a great friend and a lot more journalistic wisdom.  I credit my “work husband” Elbert Mosley for teaching me so much more than I ever knew about reporting.  I wish I could have taken him with me to my next stop, WAWS/WTEV Action News in Jacksonville, Florida.

After six years in the business I was able to be a little bit more picky about where my next big move would take me.  I mulled over opportunities in a few interesting cities.  The Florida sunshine and sandy coastline were enough to persuade me south.

I’ve now lived in Jacksonville for almost four years.  The time was approaching to start thinking, again, about where I’d report from next.  See, in television news, reporters sign contracts — usually two to three years in length — and when that’s up, you have the choice [if offered] to re-sign with the current station or to move on.  For most of us, it is always the goal to find the next best thing in a bigger market.  And for the first time, as I started thinking about it, it made me feel sick.  I didn’t want to uproot my entire life all over again.  Start over.  Again.  It’s exhausting.  And the television news industry was changing before my eyes.  Because of social media, most don’t schedule their evenings around catching the 5 ‘o’clock news.  You don’t have to — all the information you need is right there at your finger tips, hours before.  I imagine in five or 10 more years, television news will be obsolete.  And the thousands of journalists across the country will be scrambling to compete for jobs outside the industry.

Bottom line: I realized… I had fallen out of love with my dream.  It was like a cold, chilling slap across the face.  A fact you can’t ignore.  The burning feeling it left behind lingered longer than I wanted it to.  And that’s when I knew, my mind had already been made up.

Those words actually surprise me.  I was terrified walking into Jacksonville City Hall on the first day of my new job.  I’m now a public communications officer for the mayor’s administration.  I finally feel like a grown up.  I have my own office.  With windows!  I work normal hours.  I get holidays off [WHAT!]  The last month and a half has come with a great deal of learning.  And many new challenges.  Stepping into a brand new realm isn’t easy.  It’s hard being the “new guy.”  But my background and experience are helping me immensely. 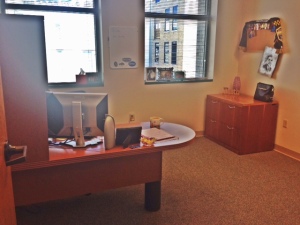 I’ve run into my former co-workers many times since I left the Action Newsroom for the final time.  I set up interviews for them weekly.  I orchestrate media events with the mayor.  I send media advisories and releases their way.  There has been one day [and only one day] I got a pang in my chest upon seeing the local reporters in action.  It was on one of the final days of a huge murder trial happening in town.  Multiple crews from all three local stations were converging on the courthouse, covering different angles of the story.  It’s a case I’d covered since the murder happened.  I’d interviewed the victim’s family multiple times.  And for a second, I was sad to be a bystander on the sidewalk, invisibly walking by as the journalists hurried around me.  But a few seconds later, the feeling passed.  After all, I was on my lunch break at the time.  Those words are foreign to news reporters.  Rarely, you’d get a chance to go to the bathroom.  Never, did you get a chance to take an hour-long break mid-day to stuff your face.

As I ate my sandwich that day, I couldn’t help but smile.

I had worried that giving up television news meant giving up on my dream.  I was scared I would lose my identity.  I feared my job was the only interesting thing about me.  I was sad I never got the chance to report the news in my hometown of Cleveland, as my dad watched from home.  I feel like I let him down in a way.  My mom assured me turning the page was not defeat, I was not a quitter.  And she told me my parents are more proud of me today than ever.

I’ve learned that dreams change.  They evolve.  And that’s ok.  I am so happy with the decision I made.  I know with all my heart it was the right one.  I love my new job, my new co-workers, my new bosses.  And I am excited to see what kind of mark I can leave on my city, in a new way.

4 thoughts on “life on the flip side.”

what did you think? Cancel reply

Kristen is a retired television news anchor/reporter, currently residing in sunny Jax, ,FL. She's a wife, cat- and dog-mom, Elvis fanatic and inspiration-seeker. Stepping to the beat of her own drum; maintaining a personal style that's just a bit off; constantly working toward a better self.